Van Gujjar community is the Nomadic pastoral community. They relies on Buffalo for their livelihood. This article focuses on the Van Gujjars of Uttarakhand.
By Iftikhar Hussain Mar 3, 2021 5 min read

Due to the COVID-19 pandemic and the subsequent lockdown, nomadic communities could not migrate to other regions without getting persecuted by the police. During the early pandemic days, many Muslims were targeted for allegedly spreading the virus and the Muslim nomadic communities such as Van Gujjars were no exception.

Impact of the Pandemic

Around 40 million people are currently practicing pastoralism in India. They face an acute shortage of fodder and have an agnostic relationship with the state machinery. Some communities are recognised as Scheduled Tribes while others such as those in Uttarakhand, come under the OBC list. As the communities practice indigenous livestock rearing, they are dependent on common lands such as grazing grounds. While pastoral nomadic communities are already facing survival challenges due to reduction in grazing lands, the lockdown intended to stop the spread of COVID-19 had unforeseen consequences for these communities.

In recent years, along with other numerous issues, Nomadic-pastoral communities are struggling with shortage of fodder and increasing restrictions on traditional migratory routes. On the one hand they are struggling in their relationship with the State due to the larger debate on ecology and its upkeep while on the other hand, if they try to sedentarise themselves, they struggle with lack of access to education, healthcare and land ownership. The severe restrictions and ban on movement during the pandemic lead to a further shortage of fodder for the livestock of the pastoral community in Pouri Garhwal (Rishikesh) in Uttarakhand. By nature, pastoral livestock needs to travel considerable distances for grazing, which could not be possible because of the severe restrictions laid down by the government.

While talking about the difficulties pastoral Nomads faced during the lockdown, Aftab, a Van Gujjar from Rajaji National Park, Rishikesh said, “Till March, we had some leftover fodder (parali). As the administration is not allowing anyone to go out, we are only able to sell milk once a day, which cannot cover the cost of feeding 40 buffaloes.” Aftab has a herd of 40 buffaloes, out of which 19 are milch.

Because the nomads cannot migrate as they used to due to the process of sedentarisation, they are seeing a loss of indigenous knowledge systems which has been further exacerbated by the pandemic.

“When the daughter of the king of Jammu and Kashmir was married to the prince of Uttarakhand, upon returning to her fathers’ home after the first year of the marriage, her father asked her if she was facing any problem. She said, father, I can find whatever I look for, but I cannot see Gujjars there and I want you to send a few of them there. So we came along with her as her dowry. This is how we came to Uttarakhand some 250 years ago. These are the stories that our ancestors told, telling us that we came from the Jammu region,” said Sharafat Ali, a Van Gujjar pastoralist.

The Van Gujjars community practices pastoralism throughout the Himalayas from Jammu & Kashmir to Himachal Pradesh and Uttarakhand. The largest share of the population lives in Jammu & Kashmir and around one lakh members live in Pauri Garhwal and Kumanoun regions of Uttarakhand. The community has been practicing pastoralism for generations in the Himalayas, rearing a unique blend of livestock in different regions. For example, in Uttarakhand, they rear buffalos as the primary animal while ponies are used for carrying loads.

Also read: Book Review: In The Belly Of The River: Tribal Conflicts By Amita Baviskar

A large numbers of Van Gujjars still practice regular migration and move towards upper reaches during the summer. Albeit, they would change routes due to uncountable restrictions and hostilities from the villagers and government departments. The process of sedentarisation degraded the quality of the livestock and its diversity.

Lack of pastures towards the onset of winter further complicated the issue. Owning a piece of land is now considered more important than having to spend a lifetime migrating from one place to another. Repeatedly, the government demolished their homes and forced some of them to an even more frugal lifestyle. “It’s like keeping the fish away from the water,” said Hamza, a community leader, while discussing the hardship. They are forced to live on the banks of the rivers and try to keep a few buffaloes to ensure a continuous flow of income.

Those who shifted to Gendai Khata, Haridwar have their own problems. As none of the family members have deeds to the land, they are forever concerned about their future. On average, those who had permits got 10 bighas of land during the second resettlement. However, those who have large livestock cannot afford to move to such a place and those who moved had to stall-feed their buffaloes and some started crossbreeding with Murrah buffaloes.

As the Van Gujjars do not have the agricultural skills required for anything other than subsistence agriculture, they started giving away land to outsiders, making it further difficult for the next generations of Van Gujjars to learn agricultural skills. The new generation from Gendai Khata is involved in jobs other than pastoralism. Only a few practitioners of pastoralism now remain in the Gendai Khata. Gendai Khata is at the nascent stage of any village. However, milk still plays a big role in the economy of the village.

Also read: Our ‘Ethnic/Tribal’ Printed Clothes May Reek Of Cultural Appropriation, Here’s Why.

The Renke commission report states that roughly 150 million people, equal to a medium-sized country, are currently practising different forms of nomadic livelihoods in India. Among them around 40 million are practicing nomadic-pastoralism and are called as gene banks of the world due to the diversity of animals pastoral communities rear and breed. 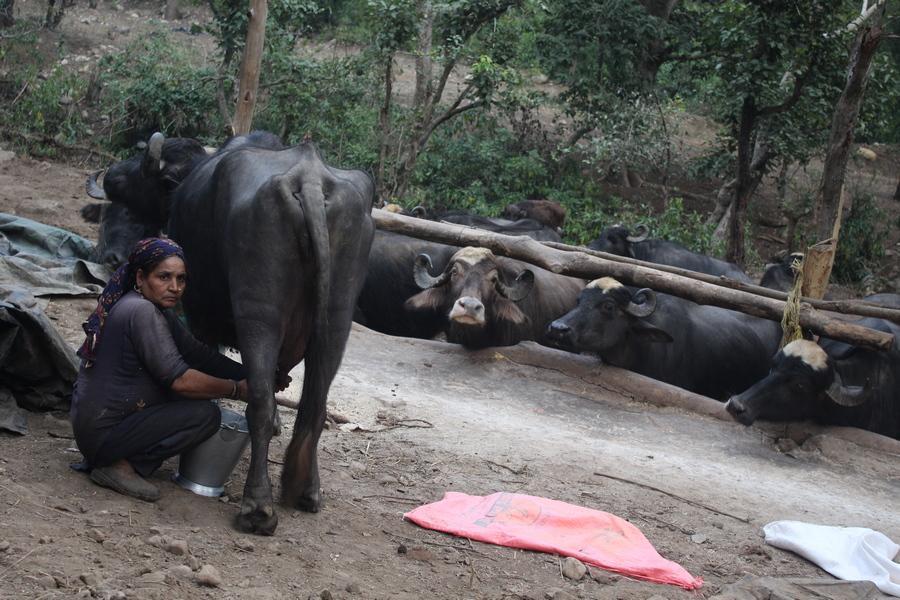 Nomadic people are also worst hit by the discriminatory policies of the government. Criminalisation of hundreds of Nomadic communities is a known fact which furthers the process of pushing away nomadic communities to the margins. At the same time, they are stereotypically targeted for any theft or even smaller crimes by the police by default. Even after the Criminal Tribes Act 1871 was repealed in 1952, they are still marked as criminal tribes or habitual offenders, and are constantly monitored by the police while carrying the burden of these stereotypes.

Nomads usually inhabit sparsely in places out of reach for the local administration since villages are usually the smallest unit of administration. They mostly live outside the villages and are hardly able to settle.The commonality among all the nomadic communities is that they all move from one place to another in search of livelihood in the form of migrating to pasture lands, cities for showcasing traditional art forms or for other livelihood needs.

The constant movement of nomadic communities not only makes it difficult to adapt to the welfare policies of the government, but also, it makes nomadic communities more vulnerable to other forms of discrimination. The eligibility to access most of the welfare schemes itself starts from having a proof of address, which in most cases is a permanent address proof.

Being a target of local administration and society for any mishappening further secluded the community from the policy approach in the past. The question of ‘data’ is a two-way sword for the community.

When a nomadic pastoral community is being sedentarised by force with numerous boundaries being erected, the impact on the diversity of animals and loss of the traditional knowledge such as traditional medicine is apparent. The pandemic has pushed the pastorals further on to the margins and with it their indigenous knowledge system.

Iftikhar Hussain is an independent researcher who has done Masters in Development studies from Azim Premji University.

Why Does India Have Such High Numbers Of Acid Attacks

Yes, Gandhi Was No Feminist But Should We Cancel Him For It?