IntersectionalityDisability Aruna Tanwar Is The First Indian Taekwondo Athlete At The Tokyo Paralympics, 2020

Young para athlete Aruna Singh Tanwar is the first to ever represent India at the Paralympics for Taekwondo
By Nikitha Sudhir Aug 26, 2021 4 min read

The Paralympic Games, 2020 has commenced at Tokyo, and India is ready with its biggest contingent ever, after the Rio Paralympics of 2016, which had 19 athletes. This time, 54 Indian athletes are set to compete across nine sports namely swimming, archery, para canoeing, athletics, shooting, table tennis, badminton, powerlifting and taekwondo.

The Tokyo Paralympics is also significant as India is making debuts in badminton and taekwondo. Young para athlete Aruna Singh Tanwar is representing India for taekwondo. The 21 year old is currently ranked world number four in taekwondo in the W-49 kg category, and is a five time national champion.

“She is the first Taekwondo athlete from India to qualify for the Paralympics. This has opened the door for all aspiring athletes, especially all female athletes who want to be in this position,” said India taekwondo president Namdev Shirgaonkar.

Aruna Tanwar hails from Dinod, a small village near Bhiwani, Haryana. She started training in mixed martial arts in the year of 2008 when a coach visited a training camp she was part of. In 2015, Aruna competed in the taekwondo nationals, in the non para-athletic category and won bronze. She became the junior champion in 2016, and won the 38 kg division at the Junior National Taekwondo Championships held in Ballabgarh.

She competed as a non-para athlete till 2017 but was considered ineligible to compete in the category since, and switched to the para category. “Since her birth, when Aruna suffered deformity in both her hands, we have treated Aruna like other children and have supported her life as a normal person. While I struggled financially, I took loans apart from spending our savings to support her dreams. It’s her willpower and eagerness to compete among the best, which has resulted in her getting selected for the Tokyo Paralympics“, her father Naresh Kumar said in an interview with The Indian Express.

At the Tokyo Paralympics, Aruna will be up against taekwondo players from Taipei, China, and Ukraine. She wishes to inspire other girls to take up martial arts as she feels it is also a great self-defense tool.

A B.PEd. student of Chandigarh University, Aruna Tanwar faced many financial difficulties through her sports journey, but she succeeded with the strong support of her parents. She started out with martial arts when she was eight years old.

Due to the pandemic, Aruna could not participate in the World and Asian qualifiers at Jordan due to the ban in flights from India but was offered a bipartite quota by the International Olympic Committee and World Taekwondo Federation. She is one of the eight athletes from eight countries who were provided the bipartite quota.

It is disheartening to note that Indian paralympians suffer roadblocks in the form of lack of funds for coaches, equipment and training. Despite the fact that para athletes bring in so many medals for the country, and we are quick to appropriate their victories as ours, they are given very minimal infrastructural support. Limited media attention also leads to lack of sponsorships.

In this context, it is relevant to note that the Chandigarh University has introduced a special sports scholarship named after international para-athlete and Arjuna Award recipient Ramesh Tikaram. The scholarship is worth one crore and and is instituted for the benefit of para-athletes. Efforts like this are present, but inadequate and scattered.

Aruna Tanwar is one of the 72 para taekwondo players from 37 countries who will compete in the Women’s U-49 category. Women in athletics have it doubly hard navigating gender and social barriers. They have to fight many kinds of obstacles to mark their place in sports. Lack of resources and societal support are among the main reasons female athletes miss out on reaching their potential. When it comes to female para athletes, the gaps widen further.

“Your boat will never get across if you run away from the waves of fear. Those who fight for their dreams will never lose to achieve them” says Aruna, who aims to be a living example of determination and encouragement for aspiring female para athletes to confidently enter the field of sports. 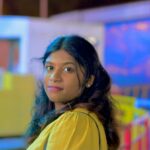