To find and be one with your own self – This is what forms the bedrock of Thirsty Sea.
By Ipshita Mitra Apr 12, 2022 5 min read

For the longest time, I would sleep with two night-bulbs on. One was midnight blue and the other emitted the yellow of a corn moon. These two bulbs in my room not only made me evade darkness but also created an ephemeral universe with the sea and the moon standing guard as I fell asleep. This make-believe safety net promised me security and sanity.

This recollection is what I was united with, almost unknowingly, after I finished reading Italian singer-songwriter Erica Mou’s debut novel Thirsty Sea, which has been exquisitely translated from the Italian by Clarissa Botsford, and published by Héloïse Press Ltd. The original Italian language title Nel mare c’è la sete was first published by Fandango Libri s.r.l. in 2020 and the English translation is scheduled to release in May 2022.

The fact that Erica penned most of this book in the kitchen of a rented accommodation in London is a strikingly feminist act. Why? Because, a kitchen is invariably associated with a woman performing the ‘feminine’ duty of fixing meals for her family.

Architecturally too, the kitchen is one of the least ventilated spaces in a home. Without getting into the debate of how modern architecture is predominantly governed by patriarchal ideology, what Erica has done is that she has redefined this space as one where she nurtures her creativity and passion for words. The kitchen becomes emblematic of freedom and innovation. Even Maria, the protagonist, is a free-spirited woman with a past. She is in an inexplicable love affair with words, especially compound words – two words with separate meanings that unite to create something completely new with an altogether different meaning (for instance, killjoy, milestone, tightrope, seashell, etc).

The book is divided into four parts: Dinner, Breakfast, Lunch, and Teatime. Interestingly, Maria is never shown as too fond of food. The people around her complain that she eats too less. The story that feeds into these four segmented mealtimes is fractured yet dense. A few pages into the novel and you stumble upon a tragedy from twenty-five years ago that Maria blames herself for. The death of her little sister Summer. Was it an accident or a murder?

With this foundational memory at the root, other bittersweet moments, escapades, events seem to branch out during the course of the narrative as the author, along with Maria, retrieves each memory carefully and cautiously like collecting seashells at the seashore. It is not a clinical but a compassionate exercise undertaken with the precision of a detached observer. The book might give you an impression of it being a thriller because it has all the right ingredients – a mysterious death, a suspicious boyfriend, a fling, a bohemian friend who sculpts a ceramic phallus, an inscrutable doctor whose wife suffers from Alzheimer’s, an imaginary dog, and two grandmothers whose names are Maria too. Still, it is not a thriller.

Confessions Of A Memory-Keeper

It is, for me, a confessional monologue and by confession, I don’t mean an admission to a crime. By confession, I mean, an engagement with one’s own interiority. Thirsty Sea is a book told through Maria’s inward gaze. Maria is a gift consultant. She has a tiny shop (read studio), sponsored by her grandmother, and named ‘BePresent’ that has minimal furniture barring two chairs and a lamp. The highlight, of course, is her friend Ruth’s gift on display (albeit camouflaged or maybe not!) that her boyfriend Nicola thought would be too much of an eyesore and embarrassment if kept at their home. Maria quips, “Considering it’s a ceramic phallus in a minimally-furnished room, it’s always managed to avoid controversy.” It is hard to miss the feminist sensibility in this unassuming incident. Both Maria and Ruth show unabashed confidence in expressing their sexual freedom and choice by somehow managing to reduce and ‘desexualise’ the male organ to a piece of inconspicuous sculpture or furniture of hardly any significance. Societal judgement and patriarchal prejudice fail to deter the two women in any way.

Ruth and Maria were college friends and the idea of “educating” people on how to be thoughtful while giving gifts was born on an ordinary day at a Buddhist temple next to River Thames in London where they would “pretend to meditate” to get into the canteen. Ruth remarks, “Do you realise how much trash there is in the world? Have you seen the shit people give their kids, those fake machine guns and dolls with the terrifying eyes? We’re so used to seeing this plastic crap everywhere that we don’t even notice it any more. Mary, let’s become gift-buying consultants! We’ll have a shop with nothing on sale, no shelves, just brilliant ideas.” (p.66). This is where the author not only introduces the burning issue of environmentalism but also brings centrestage the necessity to recognise a woman for her mind and her “brilliant ideas”, a domain usually reserved for men.

At one point, while analysing her seven-year (almost eight) relationship with Nicola, Maria comments: “Many men take up with younger women, not just for the sex, which is theoretically more generous, but also to be able to form them. To have a blank slate on which to write their story, dictate their taste in restaurants, their circle of shared friends.”

For Maria, Nicola is a practical example of Locke’s philosophy of the ‘tabula rasa’. Formlessness, liquidity, spontaneity, and timelessness guarantee a sense of cageless existence for Maria, who refuses to be confined or feel trapped. The vastness of the sky and the bottomlessness of the sea are great reassurances for Maria. A fistful of both is just not enough. As clichéd as it may appear, the world is Maria’s oyster. She is the captain of the ship, painter of her dreams, a poet, an artiste – all rolled into one! As a ‘gift-buying’ consultant, she is in charge of other people’s decisions too. She is a decision-maker who is aware of her agency and will not let go under any circumstance.

There is no such thing as either a ‘real’ woman or ‘ideal’ grief. In both, one must first find the ‘me’ and act or respond to that voice of the ‘me’. As Maria also questions, “What would I do, if I were me?” This is what forms the bedrock of Thirsty Sea – to find and be one with your own self. Upon this recognition and realisation, everything else ceases to exist. Everything else dissolves in the sea when you are busy looking up in the sky waiting for dawn, the first rays of the sun. The thirst for life should remain alive even in the face of death.

Thirsty Sea will be released on 17 May 2022. It will be available for pre-order on Amazon. 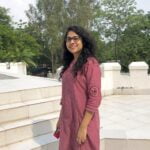 With over 10 years’ experience in publishing and journalism, Ipshita Mitra has a Bachelor’s degree in English Literature from Miranda House, DU and holds a PG Diploma in English Journalism from IIMC. She did her MA in Gender and Development Studies and is currently pursuing her PhD in Gender Studies from IGNOU.
She has worked with The Times of India, The Asian Age, The Quint, Om Books International, World Monuments Fund India Association, and The Energy and Resources Institute (TERI). In 2016, her short story ‘Cacophony of Silence’ was published by Nikkei Voice, a Canadian-Japanese newspaper. In 2020, her short story ‘Bohemian Sailor of the Gulf’ was published by Sublunary Editions, a Seattle-based independent publisher. The Indian Quarterly (April–June 2021) published her short fiction, ‘Kabuliwala Returns’. She writes on books, culture, environment, and gender for TerraGreen, The Hindu, Scroll.in, The Wire, Wasafiri, Firstpost, Huffington Post, India Currents, and others. She tweets @ipshita77.

Confessions Of A Biromantic Asexual

Is It Time For Art To Take Its Responsibility More Seriously?

The Power Within: The Story Of Anuradha, Presenter At Alfaz-e-Mewat