HealthMenstrual Health From Menstrual Taboos To Etiquettes: Or How To Menstruate Politely

From Menstrual Taboos To Etiquettes: Or How To Menstruate Politely

While some may think we’re moving past menstrual taboos since we’re finally talking, we need to take a step back and notice how the conversation is going.
By Radhika Radhakrishnan May 5, 2015 4 min read

Since high school, I’ve been taught how to menstruate politely. And while some may think that it means we’re moving past menstrual taboos since we’re finally talking about period, we need to take a step back and notice how the conversation is going.

Pre-menstrual syndrome (PMS) is socially acceptable humour. Sanitary napkins are sold in black bags because god forbid a stranger on the street actually finds out that it’s your ‘time of the month’. We make dead baby jokes, but did you hear the one about the fake tampon that walked into a bar? Speaking of fake tampons, I am yet to have seen a fake used tampon prop at party stores that sell fake used condoms, puddles of vomit and severed fingers. We discretely attribute a sick day at work to ‘stomach cramps’, or to a female boss, ‘menstruation’ – never ‘periods’, because ‘menstruation’ at least sounds slightly clinical and scientific.

The “denial” in advertising

We use denial to sell in ads by being shown blue sterile liquid because that’s somehow a perfectly accurate depiction of my standard Monday morning adventures in menstruating. We use shame to sell in ads by being encouraged to hide this phase of our lives by putting menstruation behind locked doors and safely enclosed in euphemism. To the extent that one of India’s leading sanitary napkin products is called ‘Whisper’. We say ‘daag acchhe hain’ (stains are good) in detergent ads, but we indoctrinate ‘leakage ki tension’ (fear of leakage) as we all know how much tension it causes to simply toss our stained pants into the washing machine. We use lies to sell in ads by showing only cheerful menstruating women even though the last thing a person suffering from excessive bleeding or severe cramps needs to hear is a message indicating that a ‘normal’ woman will feel like dancing when she gets her period.

And why won’t we, when the only women we see around us are sanitized and sexualized women who supposedly buy deodorant that whitens their underarms, razors and shaving creams that give them that ‘soft touch‘, and ‘extra slim’ sanitary napkins lest anyone see a slight bulge in their pants?

Violence-induced blood is acceptable, but period blood is not

As a society, we have accepted and embraced violence-induced blood. We simply cannot get more of it through all our action movies and wrestling sports. We admire it so much that we awarded an Oscar to Hurt Locker for its heroic depiction of violence and patriotic blood. But we censor menstrual blood to the extent that we take down Instagram and Facebook images of women with period stained pants and napkins. Recently a friend of mine told me that the reason people liked watching blood in movies/sports is that we connect to the struggle of either the losing person fighting back, or the winning person conquering their fears. Perhaps that is why we find it easy to overlook the struggles of a menstruating woman as she silently suffers pain with no visible opponent.

As a society, we share the blame for having hijacked the central identity of a woman and having turned it into a problem to be embarrassed about and punished for. However, at the other end of the spectrum, we have turned the supposed masculine identity – man hair – into beer shampoo ad campaigns (‘cheers to man hair’) and worldwide charity drives for prostate cancer awareness (Movember).

And then comes the usual defence – “We censor all bodily excretions – be it urine, blood, or semen”. However, toilet paper that is used to manage other bodily excretions is a commonplace item that nobody is ashamed to talk about. And yet, a woman in a restaurant takes her entire handbag with her to the ladies’ room, instead of simply carrying a sanitary napkin in her hand.

It is yet another way of restricting women

The policing of menstruation is not just a feminist issue; it’s also a health and education issue. More than 300 million women and girls in India do not have access to safe menstrual hygiene products, endangering their health, curtailing their education and putting their livelihoods at risk. At least 23 percent of girls in India leave school when they start menstruating and the rest miss an average of five days during each monthly menstrual period between the ages of 12 and 18.

Without talking about period like the normal natural process it is, we cannot hope to increase access to hygiene products, educate people about safe menstrual practices, and lobby for suitable paid holiday policies at the workplace. When we don’t talk about period, we normalize the association of period with pain which would otherwise be an indicator of something wrong with the body. When pain becomes the rule and not the exception, it becomes hard to talk about it and diagnose illness.

We need to reclaim the narrative around menstruation to something that normal bodies do, as, at any moment, about one in four female bodies between the ages of roughly twelve and fifty is doing. We need to stop striving so hard to keep something secret that, in a general way, everyone already knows its happening (Didn’t you know? Red is the new black). And if such increased discourse and visibility of period and period products offends men, woman up and deal with it – I think it’s about goddamn time.

Featured Image Credit: Devangana Kalita, from Come And See The Blood On My Skirt protest. 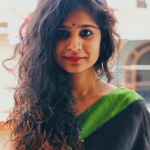 In Search Of A Home Disappearing: Book Review ‘Sambac Beneath Unlikely Skies’ By Heba Hayek