More than half the Tamil movies I watched had extremely light-skinned women from the North playing the roles of 'typical' Tamil women.
By Hamsadhwani Alagarsamy Oct 8, 2018 6 min read

“Representation in the fictional world signifies social existence; absence means symbolic annihilation.” These words are from a 1976 paper by George Gerbner and Larry Gross titled ‘Living with Television’.

It derives from the logic that the TV and other media are so pervasive and all-powerful that they shape a significant amount of our views on the world, the different people in it, and ourselves. So much so that when we don’t see people who look and behave like ourselves on-screen, we start to subconsciously consider ourselves unimportant, or think that the one-dimensional media representation of ourselves is all that’s expected of us.

I am a Tamil girl who spent her entire childhood in Delhi, a place where people called both my Malayali classmate and me ‘Madrasi’ and vehemently believed we underwent a coconut oil maalish every morning. The thing with being ‘Madrasi’ was that I was supposed to be dark-skinned. I wasn’t. I was neither as fair as my mother, nor was I as dark as my father. I was somewhere in between – brown. Yet the insult that the other eight-year-old kids thought would sting me the most was ‘kali’ (black, also the name of an angry Hindu goddess). And it did.

What was inexplicable to me back then was that one of the boys who constantly used that insult on me had darker skin than I did. So what had made him deem it okay to call me kali when the same insult could be used back at him? It was how South Indians are represented in the media. We are supposed to be dark, and being dark is supposed to be deplorable.

Also read: Cultural Appropriation: What Is It And Why Is It Problematic?

I don’t remember ever being comfortable with my ethnicity for as long as I lived in Delhi. Every single Tamil character in a Hindi movie was a vile, stereotypical caricature – all of them speaking in a weird accent, wearing a lungi, the women all wearing jasmine in their hair. Tamil people were just background characters making the cut only for their comedic value or to fill some strange cultural quota that is definitely not benefiting them.

more than half the Tamil movies I watched had an extremely light-skinned woman from the North playing the roles of Tamil women.

So when I moved to Chennai as a twelve-year-old, I thought I could finally be at peace with whom I was, for I was supposed to be home. I thought I could finally be the lead in my own story, because I had subconsciously learnt from Bollywood that at least in the North, girls like me are only allowed to act like stock characters even in real life. But more than half the Tamil movies I watched had an extremely light-skinned woman from the North playing the roles of Tamil women – Tamannaah Bhatia, Lakshmi Rai, Hansika Motwani. I did not look like any of them.

We have Punjabi women wearing dhaavanis (half-saree) and calling themselves Madurakkari (Madurai woman). We have a Sindhi woman playing the character of a pattu-pavadai-wearing (traditional South Indian attire made of silk) Tamil woman called Koperundevi, while another Sindhi woman calls herself Yazhini and plays the daughter of a Tamil teacher when the extent of her own Tamil vocabulary is limited to vanakkam (hello). The only representation brown-skinned Tamil woman get is as the best friend of the female lead, and the dark-skinned women are taught that they are jokes (looking at you, Shankar).

Characters of Angavai and Sangavai from Shankar’s movie Sivaji, who get shamed for their complexion. Image Source: Youtube 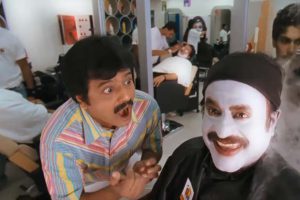 It’s no surprise then that brands like Fair and Lovely sell as much as they do. Our movies and TV teach brown and dark-skinned women that they do not matter, that they are insignificant, that their existence only bears value when it is complementing a man or a lighter-skinned woman.

To cite an oft-used (and rightfully so) example, let’s dissect the casting of Amy Jackson in Tamil movies. She is a British woman. She belongs to a country that colonised India and degraded its culture for centuries. She has no job wearing clothes and jewellery from the very same culture. They do not belong to her. They are not for her to take. It is almost sinful for her to benefit from them.

It is appalling that the people propagating the idea of Caucasian or Aryan features being the epitome of beauty are the very people being affected negatively by it.

One of her dialogues in Gethu, a movie where she plays a Tamil woman goes like this – “Naan vera parka vellakaari madhri irukken, enna yaravadhu kothitu poitanga na?” (I happen to look like a White woman, what if I get picked up?). She was cast by a Tamil director. Her lines were written by a Tamil director. It is appalling that the people propagating the idea of Caucasian or Aryan features being the epitome of beauty are the very people being affected negatively by it. Actor, model, TV and radio presenter Jameela Jamil talks in a podcast about magazines airbrushing her to make her look more White. She says, “It hurts me. It hurts me from a cultural point of view. It hurts my feelings.”  To be told that you are not good enough truly does hurt. 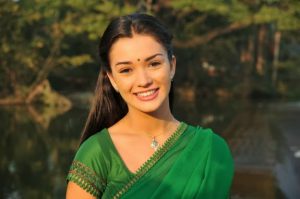 Here is a list of the top-paid female Tamil movie actors from 2016.

Only three of them can be classified as having even a medium complexion.

Now let’s take a look at the top-paid male Tamil movie actors from 2016.

When it comes to the male actors, only two of them are light-skinned.

This is an alarming trend. It implies to the world that for men, how you look does not matter as much. Talent is what comes first. But if you are a woman, being conventionally attractive is a prerequisite. It teaches young girls to base their worth on their looks, and in the hierarchy of what constitutes good looks, having light skin is on the top.

A glaring example of this double standard again involves Shankar’s Sivaji. While the men in the movie get a free pass for making fun of, and subsequently rejecting a pair of twins for their dark skin, the possibility of Shreya’s character rejecting Rajinikanth because of his skin colour invites outrage.

It is absurd to continue casting actresses with subpar acting abilities when artists like Aishwarya Rajesh do not get enough attention (Kaakka Muttai, one of her movies, even passes the Bechdel test). The best part, she looks like me. She looks like the numerous Tamil girls who don’t get to see women who look like themselves in lead roles.

The first step towards dismantling this power structure in the media is to have an active discourse about it. There need to be more people criticising every movie, every TV show from a feminist point of view. We need to come up with India-specific media representation tests, taking inspiration from the Hollywood-specific ones mentioned here, and we need to take them seriously. We need to demand inclusivity. In an industry where only a mere handful movies pass even the Bechdel test, it is hard to expect better cultural representation. But we need to start somewhere.

Hamsadhwani is a law student and anti-caste socialist feminist. Abolish the conditions that produce the prison.

Hunger Will Kill Before The Virus Does: Why Food Distribution Is A Priority Now