IntersectionalityReligion Is Our Society Ready For A Gender-Sensitised Understanding Of Devi?

In this highly polarised world and with movements against sexual discrimination and oppression it is time to diversify the concept of Devi.
By Pooja Priyamvada Oct 17, 2018 4 min read

It is that time of the year again in India when the goddess is worshipped for nine days/nights known as Navaratri/Navdurga across India in various ways. ‘Devi’ the Sanskrit word for ‘goddess’ is not simply the masculine form of ‘Deva’ or God. She is worshipped as an individual entity, a supreme being in the Shakta tradition of Hinduism.

The cultural obsession with mother goddess is one of the few common strands in almost all ancient civilisations from Greece and Rome to the Indus Valley civilisation where the roots of goddess worship in India can be traced to.

Leading Indian Mythologist Devdutt Pattanaik says, “The image of the buffalo-slaying lion-riding Durga starts appearing in Hindu mythology only in the post-Gupta period, around 1,500 years ago. Amongst the earliest images we know today is one from Ajanta and Ellora caves in Maharashtra, and from Mammalapuram dated before 7th century. Earlier icons have been traced to the Guntur district of Andhra Pradesh. After this, the goddess becomes a popular icon in Hindu temples; so much so, that it is hard to believe that there was once Hinduism without the story of Mahishasuramardini, the buffalo-slaying goddess.”

Historically, goddesses can be classified loosely into three categories. The ‘Warrior goddesses’ also known as the ‘Teeth goddesses’ are ferocious demon slayers who win wars for the gods. In the Indian Hindu pantheon, these would be Durga and Kaali. The ‘Nurturer’ or the ‘breast goddess’, who are essentially the spouses of a god. They perform the role of blessing and nourishing, like Lakshmi and Gauri. The third stream is of ‘local Devis‘ like the Sheetla and Santoshi who are more popular among the masses as cults that perform the function of bringing adversity/illness and also its remedy as per popular beliefs.

Indian feminists and modern Indian women have begun to question this eschewed goddess symbolism as it has also been used as an active tool of patriarchal oppression.

Some of the most prominent goddesses even in other cultures and mythologies have been mothers and larger than life symbols of ideal motherhood – for example, the Egyptian Isis, the Greek Demeter or in Catholicism, Mary as the mother of Jesus. But in no other culture are little girls worshipped as devis as is done in India.

The modern Goddess movement turned towards the reconstruction of many of the early traditions for a new generation of women who were constantly in conflict with their patriarchal societies that worshipped goddesses but discriminated against and exploited their real flesh and blood women in the worst possible ways.

Also read: In Diwali, It’s Not Just The Crackers Which Are A Problem

Also in spite of viewing and giving importance to various aspects of nature like rivers and even the Earth as mother, there was no hindrance in their exploitation to meet commercial ends. This finds resonance in various discourses of modern eco-feminism. Dr. Clarissa Pinkola Estes in her feminist psychoanalysis treatise Women Who Run with the Wolves and various other similar texts say that the most significant aspect of the goddess is not the motherhood but their struggle with loss, evil, and injustice. According to Amelia Quint, “Feminists have fought for the right to flourish outside the home, yet feminist spirituality in many ways returns them to that sphere.”

Several western feminists and plenty of women globally find Hindu goddesses inspirational and givers of inner strength. However, Indian feminists and modern Indian women have begun to question this eschewed goddess symbolism as it has also been used as an active tool of patriarchal oppression. An intricate feminist analysis of Hindu mythology often reveals codes that show the goddess, though present, is inferior to male god or is created by one of them or several of them collectively to fight their wars and thus denied any independent agency.

The little pre-pubertal girls who are worshipped on the eighth and/or ninth day of Navratris are often abused and discriminated against.

There are so many Devi temples where menstruating women or perceived lower caste women are even prohibited from entering, plenty of places of worship of Devi where only men are allowed in the inner sanctums and not women. The little pre-pubertal girls who are worshipped on the eighth and/or ninth day of Navratris as Kanjak or kanya are often abused, discriminated against and shunned for being born as girls for the rest of the days and are supposed to be ‘impure’ to be worshipped once they start having periods.

The Need Of Contemporary Understanding Of Devi

We are living in a highly polarised world and with movements against sexual discrimination and oppression like the recent #MeToo that emerged in the West but gained ground in India, it is time to diversify the concept of the goddess.

Almost all cultures that consider the earth as Mother thus must do things to curb the damage to the environment around them. In fact, some feel, “The Goddess might well be a projection of male fantasy of womanhood, but women, as throughout history, could use the tools of subversion and reversal to find what they wish for in the symbol.”

A few years ago, Taproot India developed a campaign that presented the images of the three main Hindu goddesses – Durga, Saraswati, and Lakshmi, the in their finery but their faces bearing bruises and injuries indicative of violence against women.

It is time, maybe that all these symbols related to Goddess need to be re-imagined to suit the present climate and the chest thumping “Jai Mata Di, Mata ki Jai”, the ostentatious Devi worship needs to be followed by if not replaced with a safer and more equal life for real girls and women.

1. Women Who Run With the Wolves: Myths and Stories of the Wild Woman Archetype by Clarissa Pinkola Estés.
2. An Introduction to Hinduism by Gavin D. Flood
3. Political Theology 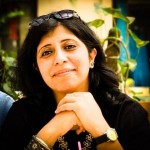