HealthMenstrual Health It’s 2018, Why Are We Still Stigmatising Menstruation?

It’s 2018, Why Are We Still Stigmatising Menstruation?

In a utopian world where menstruation is considered normal, we will bleed red instead of blue and sanitary napkins will be handed over without any secrecy.
By Joyoti Chowdhury Nov 12, 2018 4 min read

We have been raised to fear the yes in ourselves.
-Audre Lorde

I cannot really utter ‘this’ term out loud. It might just create an awkward silence or arise a sense of discomfort. And for some, it might be something really ‘gross’ too.

When ‘it’ happened to me for the first time, I was unaware of such a ‘thing’. I could not even believe something like ‘this’ actually does happen and that one has to endure constant pain as a result of ‘it’ every month. I cannot really blame anyone for my ‘un-enlightenment’ because how can I expect someone to talk about something so flagrant?

And yes, I too believed it for a long time. I hid ‘it’ from all the male members of my family because a simple utterance of ‘it’ can corrupt them too. Oh yes, I forgot to mention the most significant aspect, that it is exclusive only to people with uteri. I know there are so many things gross about women and I am definitely sure you still can’t make up your mind about ‘it’. Do not worry, I will definitely help you understand it as my writing proceeds.

yes, I too believed it for a long time. I hid ‘it’ from all the male members of my family because a simple utterance of ‘it’ can corrupt them too.

One of my friends told me once that she cried when it happened to her for the first time. She was embarrassed when ‘it’ appeared as ‘it’ had left stains in her school dress. I mean, why not be embarrassed? It is from a very young age we all are taught to be ashamed of something so crass.

I must also tell you, there is really nothing difficult about ‘it’. So what if you cannot do what you want during that period? So what if you are not allowed to touch things you want to or if you are prohibited from eating some of your favourite foods? If you are asked to remain in isolation? So what if you shout out loud in pain sometimes? These cannot really be excuses to dismiss ‘it’ as not an obnoxious thing.

Does it appear strange to any of you? Or maybe, it’s just relatable after all?

The verdict announced by the Supreme Court on 28th September, 2018, which ruled out the centuries old tradition really seems utopian when one tries to make an effort to make a note of everyday struggles one has to face as a result of ‘it’.

Also read: Bodyform Ad: Periods Are Normal, Showing Them Should Be Too!

Yeah, let’s address the elephant in the room which is proudly and fascinatingly called ‘men-struation’ though it is exclusive to women and people with uteri. Maybe it is the only term that has ‘men’ in it which has failed to earn a respectful position in the kingdom of patriarchy.

The Latin term, ‘menstruate’ came from the term ‘menstrus’, meaning monthly. The taboo around the term ‘menstruation’ and the rampant discrimination against it can be clearly visible from the popular notions and assumptions attached to it. It is also very ‘hysterical’ to witness how the media, for years, has effortlessly changed the colour of menstrual ‘blood’ on the sanitary napkins (oops did I just write it!) to blue.

Let’s just not stop ourselves at posting radical thoughts in our social networking sites, but maybe start thinking a little beyond it.

It is also interesting how in this patriarchal system we have capably hierarchised even the ‘blood’. When a martyr’s blood is given utmost importance by the state, on the other hand an individual had to pay tax even few months ago to avail menstrual sanitary pads.

And for those who would not believe any of it without any statistical evidences, I’d like to inform them that menstruation happens to every person in the world who has an uterus when they reach puberty.

I can cite instances where millions of women have tried to hide the term, from people around them. This has actually helped menstruation in earning diverse nicknames which are really problematic. In most cases, the way sanitary napkins are packed in medical shops in a black poly bag, I might someday happily gift that packet to the shopkeeper.

It is also important to talk about menstrual hygiene when we are talking about menstruation. In the recent years, many schools in urban region especially, all-girls schools have adopted initiatives to create awareness around this topic. But it still remains questionable as to why is it not imparted to all the genders. It is important to perceive that when reproduction is included in the curriculum, the detailed understanding of menstruation should also be incorporated.

However, when I am talking about the awareness program around menstrual hygiene, it is important to acknowledge that one is still addressing the issues from a privileged ground. The reality is that in many schools in the country, neither is there the provision of vending machines nor the awareness around menstrual hygiene. It is important for us to spread awareness even in the remote corners. It is thus equally vital for all of us to pronounce the term menstruation to dilute the stigma attached to it.

So when, the Supreme Court proclaimed, “Patriarchy in religion cannot be allowed to trump right to pray and practice religion.” This might just be a stepping stone but the utopian dream is yet to be achieved.

In an utopian world, menstruation wins the identity politics of its own. Hopefully, in that utopian world we will bleed red instead of blue. Sanitary napkins will be handed over without any secrecy. A child will know what menstruation is before experiencing ‘it’ for the first time. And menstruation will not be constricted by shame and restrictions.

Also read: Dear Smriti Irani, If Only Women Didn’t Have To Wear Their Bleeding Uterus

All this might appear very illusory. Let’s just not stop ourselves at posting radical thoughts in our social networking sites, but maybe start thinking a little beyond it. Let us extend the verdict of the Supreme Court even to our world within the four walls. Let menstruation live as an independent entity because, trust me, ‘it’ has mood swings too! 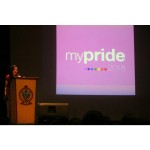 What Is Gender Dysphoria?: Addressing The Conflict Between Biological Sex And Gender Identity