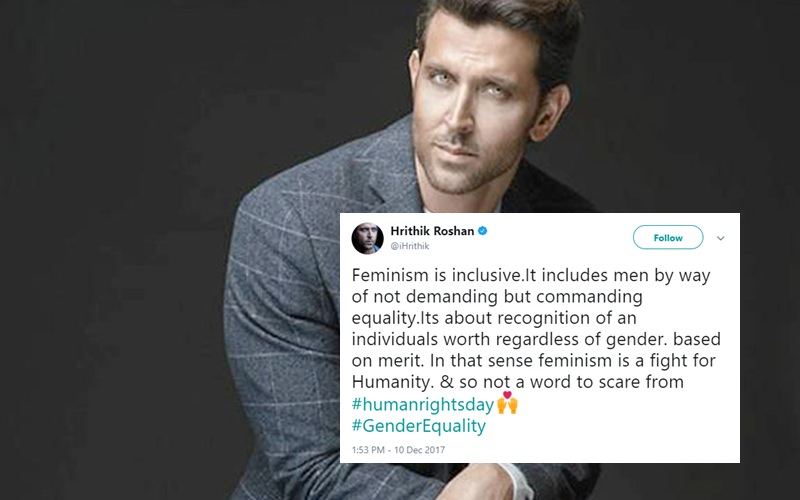 Sunday, December 10th, was Human Rights Day. The world came together to stand up for equality, justice and human dignity. As India’s Bollywood superstar, you, Hrithik Roshan, also chimed in with your views on Human Rights.

Feminism is inclusive.It includes men by way of not demanding but commanding equality.Its about recognition of an individuals worth regardless of gender. based on merit. In that sense feminism is a fight for Humanity. & so not a word to scare from #humanrightsday#GenderEquality

You used your tweet to address feminism. And the vague tweet attempted to resonate with USA’s Former Secretary of State’s words that are frequently associated with the feminist movement in the west: “Women’s rights are human rights”.

At first glance, it seemed like your words express its solidarity with feminism. I was immediately validated to have worn that t-shirt with your face on it as a little girl the year Kaho Na Pyaar Hai came out. But as well-intentioned you might have been, the tweet actually represents a few problems and hurdles that feminist conversation usually faces.

Let’s refrain from making statements just because they sound cool. Let’s back them up with our actions.

It is increasingly becoming harder to make sexist statements and get away with it – especially for those under the public eye. While words are changing, actions remain the same. It is hard to give any weight to your words when you are a part of an industry that churns out content oozing misogyny in huge numbers. Your own movies have frequently promoted the trope of ablaa naari in need of rescuing or have featured two-dimensional female characters, present to appeal to the male gaze.

Show us you are a real feminist, and not a fake one (what I call a ‘fauxminist’). Maybe you could start with playing a supporting character in a female-driven movie? Or refuse to work on scripts which don’t pass the Bechdel Test?

Your particular words that state feminism “includes men by way of not demanding but commanding equality” implies that men have to command equality. It is unclear for who you are speaking, but we are giving you the benefit of doubt that you are not secretly a men’s rights activist, and are talking about commanding equality for women.

Yes, there is a whole lot of room for men in the feminist movement – feminism requires a lot of effort and change on behalf of men. But it is important for men to let women speak for themselves, demand their rightful place in society and command their own fate.

A male ally’s job is to use his privilege to listen to and amplify female voices instead of speaking for them. If you want to fight the good fight, put your money where your tweets are and produce movies with upcoming female writers, directors and cinematographers. Retweet female writers and artists.

As a feminist, you surely understand the importance of diverse representation in media. Or when a woman or a member of a marginalized community in the industry comes forward with complains about sexism or nepotism in the industry, use your wider audience to have that uncomfortable conversation. Challenge other men in the industry to drop sexist movie conventions that promote rape culture. That will amount to a lot more change than a tweet.

A male ally’s job is to use his privilege to listen to and amplify female voices instead of speaking for them.

Feminism is a lot more complex than you think

Your tweet also mentions that feminism is about the recognition of an individual’s worth regardless of gender. Yes, that is one of the ultimate goals for feminists. But we are far from that. I wish it was as simple as saying what you tweeted.

We cannot simply jump to not seeing a person’s gender to judge them. Getting to equality is a slow, long, and difficult uphill climb, especially for women. To get there, we all need to recognize the patterns of oppression and power imposed on women, you as well. You need to understand that gender discrimination is very normalized.

So much that you, me and most of the world, miss the signs of sexism in our daily lives. The only way to do that is to listen, to be aware, not be resistant to change and to understand that the issue is a lot bigger than you or anyone else.

For that little girl in me, that wore your face on a t-shirt with joy, watched your suave dance moves and attempted to dance along, and for all the little girls and women inside and outside Bollywood, listen to this humble feminist and promise to use your power and privilege to do more than just drop a vague, half-informed tweet on Human Rights Day. Show us that you really aren’t scared to be a genuine male feminist ally.

A former fan no longer afraid of being called a feminist

Etiquette Is Gendered And Its Burden Falls On Women